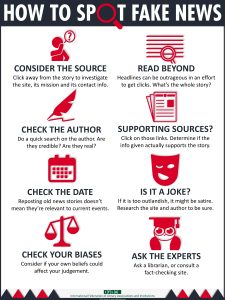 So, the term ‘fake news’ has been around a lot lately, but what does it actually mean? According to some people, anything that runs counter to their own views is fake news. For others, it’s propaganda or advertising masquerading as news. There are also web sites written to look like news but that are actually just meant to stir up controversy. The infographic above gives you some tips on what to look for to help you spot fake news. If you’d like more information, the following sites are good not-fake sources.

AllSides looks at bias in news reporting and shows you he same news item covered from different points of view.

This entry was posted in Digital Literacy. Bookmark the permalink.