Black Canadian athletes often transformed discriminatory attitudes towards visible minorities by achieving excellence on the field of competition.  As captain of the Canadian Olympic track and field team, Dr. Phil Edwards challenged Nazi-fuelled racism at the 1936 Olympic Games in Berlin with his leadership and athletic prowess, capturing bronze in the 800-m event. The first female black athlete to represent Canada, sprinter Barbara Howard captured medals at the British Empire Games in 1938 and later became the first black teacher to be hired by the Vancouver school board. The only Canadian ever inducted into the Major League Baseball Hall of Fame, Ferguson Jenkins never forgot the barriers his father had faced only a generation earlier as an athlete in the era of racial segregation. These and the outstanding achievements of many other black athletes have enriched Canada’s sport heritage immeasurably, affirming the power of sport to promote equality, diversity, and the universality of human potential.

Phil Edwards was known as the “man of bronze” for the five bronze medals he won at the Olympic Games from 1928 to 1936. No other Canadian athlete matched this achievement until 2002. Originally from British Guiana (now Guyana), he moved to Montreal to compete for Canada at the 1928 Olympic Games in Amsterdam. He was among the first Black athletes to win an Olympic medal showing the competitive spirit that marks a true Olympian.

At the 1936 Olympic Games in Berlin, Dr. Phil Edwards was named captain of the Canadian Olympic team. Edwards was the perfect fit for the role; he had captained McGill’s University track team to five successive championships, and had won four Olympic bronze medals at the 1928 and 1932 Olympic Games. His selection as captain, however, was a powerful statement since Germany intended to use the Games as a means to showcase the “superiority” of the Aryan race, and Edwards was a black Canadian.

Adolf Hitler, and his propaganda expert, Jospeh Gobels, used the Berlin Games to promote Nazi ideals, which included the belief of the inferiority of non-White groups. In the 800-metre track final, Edwards raced to third place to take the bronze medal, and in doing so, became Canada’s most decorated Olympic athlete during the twentieth century. In such a racially tense atmosphere, Edwards, along with other black athletes from around the world, continued to run in the face of racism. On the way back to Canada, the Canadian Olympic team stopped to stay the night at an English hotel, but other patrons began kicking up a fuss at the presence of a black man in their midst. In a gesture of solidarity, the team stood up for Edwards and they left for a safer and more welcoming night stay elsewhere.

After his return to Canada, Edwards enlisted in the Army and served as a Captain fighting against the Nazi regime in World War II. But Edwards did not just confront racism on the track and on the battlefield; he also challenged the racist stereotype that black people are not intelligent. Edwards graduated as a medical doctor from McGill University in 1936, and he also received a graduate diploma specializing in tropical diseases for his pioneering medical work.

Although prejudice against people of color still exists today, the idea that black people are inferior to others is completely false. Dr. Phil Edwards’ athletic excellence, leadership skills, and medical career successfully and heroically defied racist stereotypes. Due to the effort of Edwards, and many other figures like him, Canadians have a proud history of confronting racism. 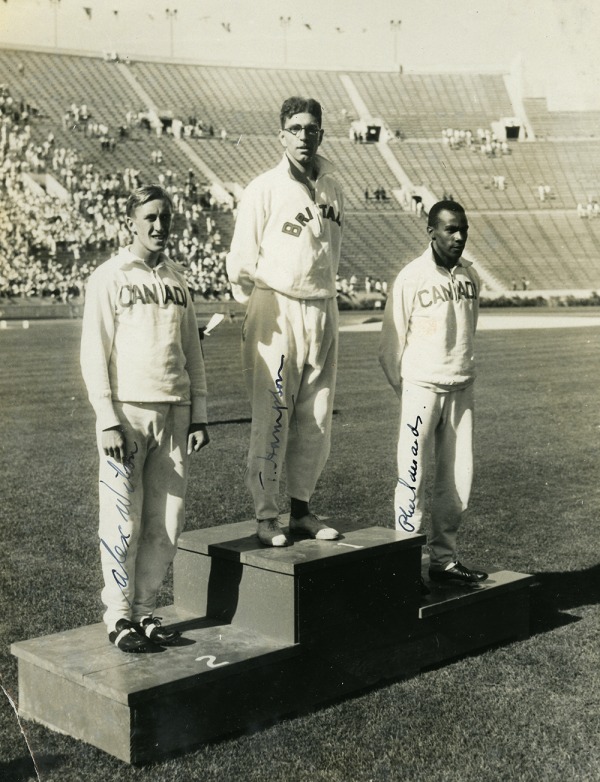 Phil Edwards was recognized not only as a top athlete but as a humanitarian. After his athletic career was over he became a leading physician and tropical disease expert in Montreal and went on to use his expertise on international medical missions. He helped develop Canada’s first international sport effort which assisted young developing athletes in the eastern Caribbean.

SOURCE
“Canadian History and Society Through the Lens of Sport.” Canada’s Sports Hall of Fame. http://canadasports150.ca/en/black-athletes/phil-edwards/124 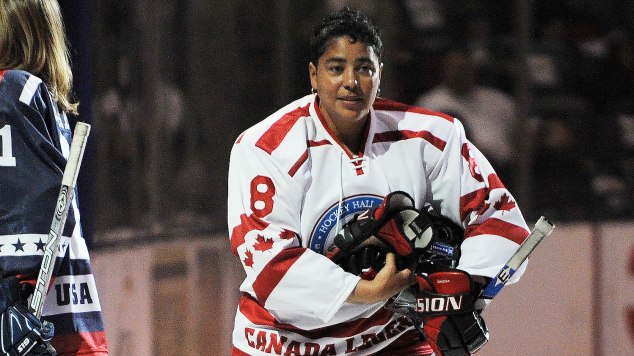 Angela James is a Canadian hockey player. Angela was born on December 22, 1964 in Toronto, Ontario. Angela is known as the “Wayne Gretzky” of women’s hockey. Angela grew up in a single-parent home in relative poverty in Toronto. Her mother made many sacrifices so that James could play hockey. As a child of mixed-race parentage, James suffered insults and racial discrimination while growing up. As a youngster, James played a lot of road hockey with neighbourhood boys, as there were few girls’ ice hockey teams. By the age of 13, James was playing senior level hockey and by the time she was in college, she had a reputation as a big, tough, and talented player who could score goals. Her abilities earned her many comparisons to the top male players of her time, like Mark Messier. Angela James was a pioneering and dominant force in women’s hockey during the 1980s and 1990s. James led the Canadian women’s hockey team to four world championships (1990, 1992, 1994, and 1997). She was also one of the first three women to be inducted into the International Ice Hockey Federation Hall of Fame. When James was inducted into the Hockey Hall of Fame (in Toronto) in 2010, she was one of the first two women, the first openly gay player, and the second black athlete to ever be inducted. Though she had many challenges in her life, James overcame poverty, racial taunts, and gender discrimination to become the first superstar of modern women’s hockey. 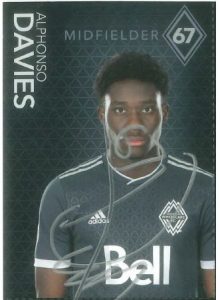 Alphonso Davies is a Canadian soccer player. Alphonso was born on November 2, 2000 in the Ghanaian refugee camp of Buduburam. Life in the refugee camp was difficult as it lacked clean water, food, and proper sanitation. When he was five years old, he and his family moved to Edmonton, Alberta. It was while Alphonso was at school that his talents were noticed. As Alphonso’s parents worked long days, they did not have a lot of spare money to go towards Alphonso playing soccer in a registered league. His grade 6 teacher got him enrolled in the Free Footie program, which was a free after-school soccer league for inner-city kids in elementary school who couldn’t afford registration fees and equipment or get transportation to games. Alphonso only spoke broken English at this time, but his love and talent for soccer was obvious for everyone. He quickly progressed through various Edmonton soccer leagues and by age 14, he was enrolled in the Vancouver Whitecaps’ residency program. During his time with the Whitecaps, Alphonso progressed rapidly and by age 15, he was playing in MLS games regularly. Davies also played for the Canadian national soccer team in 2017, receiving his Canadian citizenship just days before playing his first match. Seen as a once-in-a-generation talent, Davies played for the Whitecaps for two years before being traded to the Bundesliga team, Bayern Munich. Today, Davies is considered one of soccer’s best talents and even though he continues to see success, Davies’ remembers where he came from and all those who helped him get where he is today.

Barbara Howard is believed to be the first black woman athlete to represent Canada in an international competition and the first person from a visible minority to be hired as a teacher by the Vancouver School Board.  Born in 1920, Barbara grew up in the Grandview neighborhood of Vancouver. It was during high school that she demonstrated her remarkable and unprecedented speed. In 1938, Barbara broke the British Empire record for the 100-yard dash. Later that year, she represented Canada as a member of the Canadian Track Team at the British Empire Games in Sydney Australia. At the games, Barbara finished sixth in the 100-yard dash, but won silver and bronze as part of the 440-yard and 660-yard relay team. While in Australia, Barbara became a media darling, earning many Australian admirers and many front page covers in Australian newspapers. She was never able to compete in the Olympics as the 1940 and 1944 summer games were cancelled due to World War 2. In 1941, she became the first racialized person to be hired by the Vancouver School Board. She had a 43-year career in education, including 14 years as a physical education teacher, before retiring in 1984. Throughout her life, Barbara Howard was continually active in her community, working with groups such as the YWCA and in her later years, with the Burnaby Confederation Centre. Barbara Howard passed away in 2017 at age 96.