Born in 1821, Robert Seldon Duncanson (1821–1872) was the first African-American artist to gain national and international fame.   Duncanson settled in Canada in 1863.  He avoided the United States for nearly the duration of the Civil War, when the status of African Americans was being contested on the field of battle.  He was inspired by the Canadian landscape, depicting its beauty in works such as Owl’s Head Mountain (1906).  Duncanson set an example for Canadian painters, who began to follow him.  He arrived in Canada at a formative time, when Canadian painters were asking themselves, “‘Who are we?’ and ‘Who are we going to become?’” Duncanson helped these artists find a new approach—one in which they increasingly looked for inspiration in their own country rather than in European schools of landscape painting.   Duncanson is credited with inspiring young Canadian artists to take up nature as their subject and some art historians even have suggested that he single-handedly started a national school of Canadian landscape painting.

Buseje Bailey is a Canadian artist and curator working video and multi-media whose work explores the construction of the diasporic Black self.  Bailey’s multidisciplinary work explores themes of the Black diasporic identity and women’s history. Her video work is distributed by V tape in Toronto.  She was cited as an outstanding Black Canadian artist in a 2018 article published by the Canadian Broadcasting Corporation Bailey earned her Bachelor of Fine Arts at York University, Toronto in 1981 and her MFA from the Nova Scotia College of Art and Design in 1991.  In 1994, Bailey held a solo exhibition titled Body Politics at McGill University.   In 1995, Bailey’s Making Connections Across Art Forms exhibition was held at the Eye Level Gallery in Halifax.  The Women’s Art Resource Centre held an exhibition of her work entitled The Viewing Room in 1999. Her work was also featured in the exhibition Black Body : Race, Resistance, Response, curated by Pamela Edmonds in 2001 at Dalhousie Art Gallery in Halifax, Nova Scotia.

In 1989 Bailey participated as both a co-curator and an artist in the group exhibition Black Wimmin When and Where We Enter, the first exhibition in Canada to focus entirely on the work of Black women artists. The show toured across Canada and has become a foundation for organizing efforts by Black women artists and curators.  Bailey’s work was paired with Walter Redinger’s in an exhibition at the McIntosh Gallery, University of Western Ontario, in 1998.

Bailey was a featured subject in the 2017 Black Artists’ Network in Dialogue exhibition Light Grows the Tree at BAND Gallery in Toronto, which featured photographic portraits of leading Black Canadian artists, authors, curators and collectors.

Below is a short autobiography discussing the issues explored in Buseje Bailey’s work.

My work is an attempt to explore and understand the diverse arguments and practices within the cultural politics of “difference.” In past work I have exposed the nature of my ‘being’ and the nature of my practice in order to investigate and reconstruct myself in a tangible way — historically, racially and sexually. The traditions and contemporary practices of artists of colour have been and continue to be excluded from the art hierarchies (though much tokenism and lip service has been paid to inclusion). The rhetoric of postmodern discourse and contemporary art practices have questioned the issue of exclusion and cultural appropriation. The awareness of this discourse by Third World Artists has resulted in the development of a dialogue. This dialogue has resulted in the beginning of a new art community where issues of ‘exclusion’, cultural appropriation, and visual representation are central. I am a Third World Artist living in an advanced industrial and cultural centre, in a society of privilege. I find myself in an ambiguous location and it is a very difficult place to be. How does rhetoric and this friction affect my political and artistic practice? How do I speak as an individual? Do I represent a mass unit? In this atmosphere how do I challenge myself to work without acceptance, and at the same time increase public understanding and appreciation of my art. These are the questions I am working with. My work “Body Politics” and my videos are an exploration of these issues.

Sylvia D. Hamilton is a renowned artist,  filmmaker, writer, poet and educator, born in Beechville, Nova Scotia. Hamilton spent her early years in Beechville, a community founded by the Black Refugees of the War of 1812. She began her education in the local segregated school, and later attended an integrated high school; Hamilton was the first high school graduate from the Black community of Beechville, and went on to earn a BA from Acadia University and an MA from Dalhousie University. She currently teaches Journalism at the University of King’s College.

Throughout her life, Hamilton has worked in a variety of capacities, particularly within the media industries, as a radio journalist, a freelance broadcaster, and for cable television. Her journalistic expertise has since loaned itself to her career as a filmmaker and artist, as much of her work has to do with exploring the lives of people of African descent and sharing their experiences. Hamilton interweaves themes of history and memory in her work, striving to give voice to the struggle of African Canadians by presenting accounts of slavery, racism, segregation and oppression.

In 1989, Hamilton’s first film, Black Mother Black Daughter was released, and her second film, Speak It! From the Heart of Black Nova Scotia, won a Gemini Award in 1994. Since then, Hamilton has won numerous other awards for her internationally acclaimed works, including the Portia White Prize, the CBC Television Pioneer Award, and the Queen’s Diamond Jubilee Medal. In 2014, she published her first collection of poetry, And I Alone Escaped to Tell You, which examines the atrocities faced by early Black Nova Scotians. Notably, Hamilton has made it her life’s work to provide an honest historiography for African Canadians through filmmaking, visual arts, and published poetry.

In 2019 Hamilton was awarded the Governor General’s History Award for Popular Media for her extensive work focusing on the history and experiences of Black Canadians. Her movies, essays and poetry have enriched Canadian’s understanding of their past, bringing to light Black Canadian’s experiences with long standing racism, as well as celebrating the contributions they have made over centuries. This is a feat that has been largely overlooked by many historians.

Please take a moment to read one of Hamilton’s poems.

Poem: “The Passage” – Published in And I Alone Escaped to Tell You (Gaspereau Press, 2014)

We had our own names
a past a present.
We worked we loved.
Sang songs to the wind
prayed to our Gods.We did not know the future
would not be oursWe fought. And we foughtAnd when we were spent
terrors, like a buzz of locusts
invaded our sleep, night terrors,
not chased away by the morning sun,
night terrors stalking us.And when we went crazy with pain
sinking into the dank water, blood
rushing from the hole in our chestsstill the terrors danced on our bodies,
waiting, waiting to overtake the next ones –
shackled below on the Severn in full sail
behind us.The sons of darkness stole our children’s tomorrow.
OTHER WORKS
Sylvia D. Hamilton at the 12th Canada’s History Forum: https://www.youtube.com/watch?v=AoqfddvAJ1I
“The Little Black Schoolhouse” (film): https://www.youtube.com/watch?v=XR5bfhhbOE8
And I Alone Escaped to Tell You: https://www.youtube.com/watch?v=L5mKnj_5Ahs 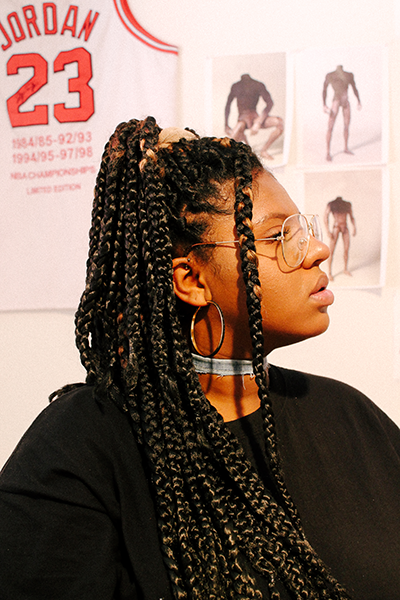 Esmaa Mohamoud is a visual artist based out of Toronto. After earning her Masters of Fine Arts by the age of 23, she has worked her way to prominence, showing her work at major art galleries in both Canada and the US.  Mohamoud’s work focuses on representing and challenging ideas of blackness and gender, while never shying away from the role that racism plays in these experiences.

As a part of her 2017 exhibit “One of the Boys”, Esmaa creates bold wearable sculptures from basketball jerseys and ball gowns that showcase the role race and gender play in the lives of young black Canadians. In an interview with the CBC she talks about the sculptures, “They remind me of Disney princesses and my neighbourhood basketball courts all at once”… The installation One of the Boys is a physical articulation of a childhood vision for Mohamoud, delicately balancing the external pressures to be feminine with her childhood desire to wear her Vince Carter jerseys every day. “I was just a little girl who wanted to be Vince Carter and didn’t know how to be.”