2021 THIS IS US: PHOTOGRAPHY CONTEST 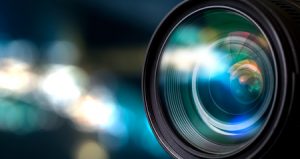 The contest is inspired by the stories that artifacts tell.  Artifacts, a vital part of our living history, exist all around us. Students at Burnaby Central are invited to photograph an artifact and tell its story.  What memories of your cultural and family heritage exist within the objects of our lives? How does an artifact reveal these heartfelt and insightful stories?  How does an artifact transcend time, revealing our collective memory?

To check out the contest details, please go to the THIS IS US tab on the SS webpage. 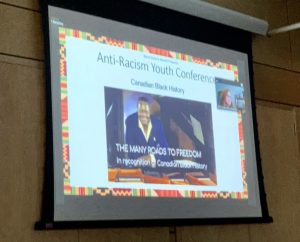 In celebration of the 25th year of Black History Month in Canada, a number of Metro Vancouver School Districts (Burnaby, Vancouver, Surrey, Maple Ridge, Coquitlam) participated in the Lifting Black Voices Youth Conference.  This was a unique opportunity to see an official address by the Honourable Jean Augustine, who is the first Black woman to be elected as a Member of Parliament.  Augustine is also responsible for securing unanimous legislative support for Black History Month in Canada.   We heard from the keynote speaker Kamika Williams, who is the chair person for the Anti-Racism Coalition of Vancouver and the organizer for the Black-Shirt Day initiative this year.  Williams stressed the importance of representation, particularly in schools, as a way to dismantle racism, microaggressions, and harmful stereotypes.   Representation plays a pivotal role in fostering safe spaces where all people can feel connected and valued.  Cecily Nicholson and Khari McClelland are both activists, organizers, and spoken word artists who gifted us with a greater understanding of the experiences of Black Canadians and Black people around the world through poetry and song.  The conference culminated with an extraordinary student panel who courageously spoke of their experiences as Black Canadians and Black students in the public education system.

A big thank you to Beth Applewhite and Kenneth Headley for facilitating such an memorable, moving, and inspiring event!

In the words of Kamika Williams: “See Something.  Say something. Do something.  No movement is too small!”

Happy Lunar New Year! We welcome the year of the Ox! 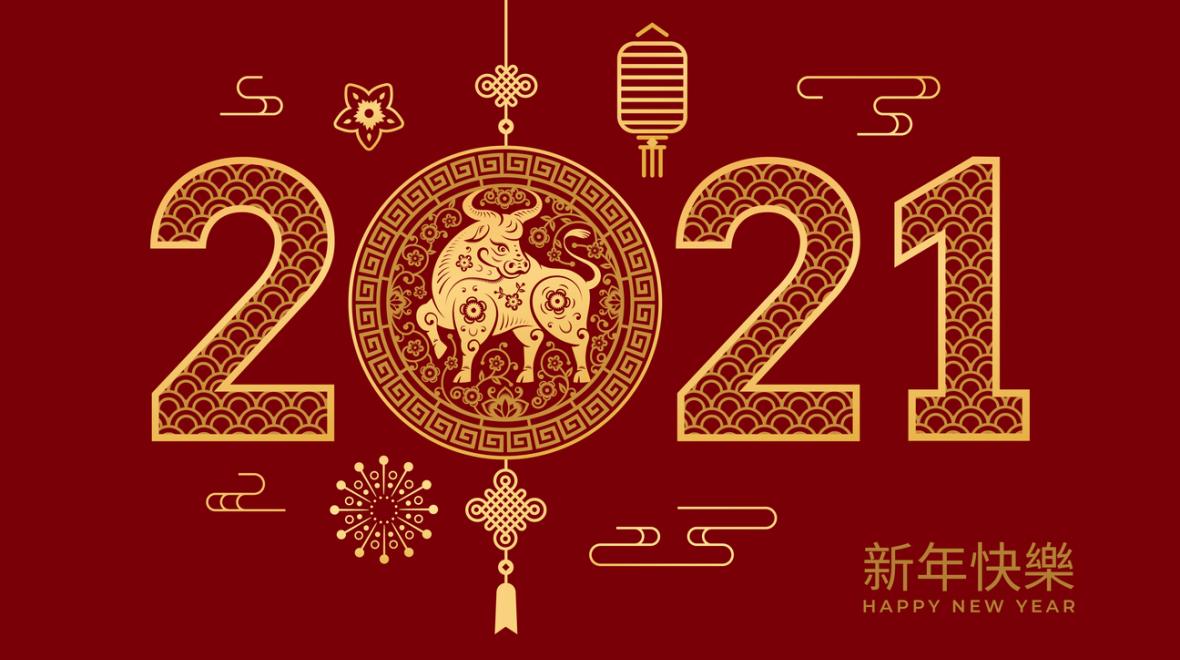 May the year ahead bring your family, friends and community, the steadying strength and perseverance of the Ox!

Please see the Lunar New Year tab on our Social Studies web page to explore some interesting facts about how this celebration is observed around the world!

During Black History Month, Canadians celebrate the many achievements and contributions of Black Canadians who, throughout history, have done so much to make Canada the culturally diverse, compassionate and prosperous nation it is today. Throughout February, the Burnaby Central community aims to increase community awareness about the contributions of Black Canadians and to foster an understanding of the history of Canada as the history of Black Canadian experiences.  We strive to encourage a critical understanding of the challenges Black Canadians have faced, and continue to encounter, and lay the foundation for the necessary conversations around how these challenges are a reflection of a larger social prejudice in Canadian society.  While February has been recognized as the national month  honouring Black Canadian History, these efforts to raise awareness and to nurture critical dialogue, must not be restricted to the month of February, but rather be a responsibility that we embrace and carry out every single day.

Today commemorates the tragedy of the Holocaust that occurred during the Second World War. The Holocaust  refers to the Nazi’s mass persecution and planned slaughter of the Jewish people and other minorities.

It began in 1933 when Adolf Hitler came to power in Germany and ended in 1945 when the Nazis were defeated by the Allied powers. The three allied powers were Great Britain, the United States, and the Soviet Union.

After the surrender, Allied forces discovered concentration camps like Auschwitz, and were horrified to see the prisoners of war.

Many holocaust victims were ultimately displaced and had no place to call home, which also saw the establishment of Israel in 1949.

Leo’s Journey: A Story That Must be Told

Wednesday, January 27, marks the 76th anniversary of the liberation of the Auschwitz-Birkenau concentration camp in Nazi Germany. In a world that is rife with discrimination and persecution, it is important that we remember testimonies like Leo‘s Journey and use its teachings to chart a path towards a more tolerant future.

While most of us know the Auschwitz-Birkenau concentration camp as the place where nearly 1.2 million prisoners – almost all of them Jewish – were exterminated, it had another equally dark and tragic secret. It was here that doctors performed horrific experiments on live prisoners, with a specific focus on twins. One of those was a 15-year-old Jewish boy named Leo Lowy. Leo went on to live a long and productive life, but the memories of what he and his twin sister, and countless others, had to endure at the hands of their captors stayed with him until his dying days. And before he passed away in 2002, Leo shared his story with his son Richard so what he and all the others endured would never be forgotten.

Leo’s experiences as a young Jewish man prior to WWII provide valuable lessons today about the devastating impacts of intolerance and discrimination. 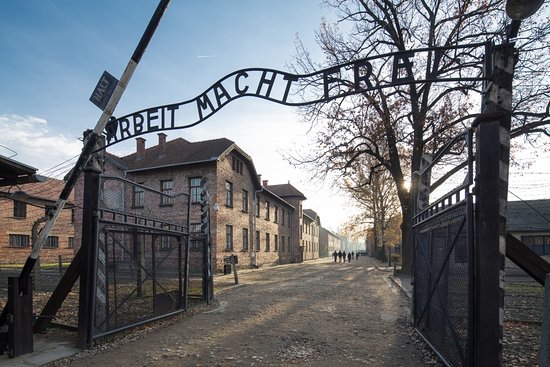 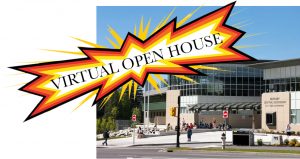 Our annual Open House (which will be virtual this year) will be POSTED LIVE on our school’s website on Thursday January 28th, 2021 by 3PM. 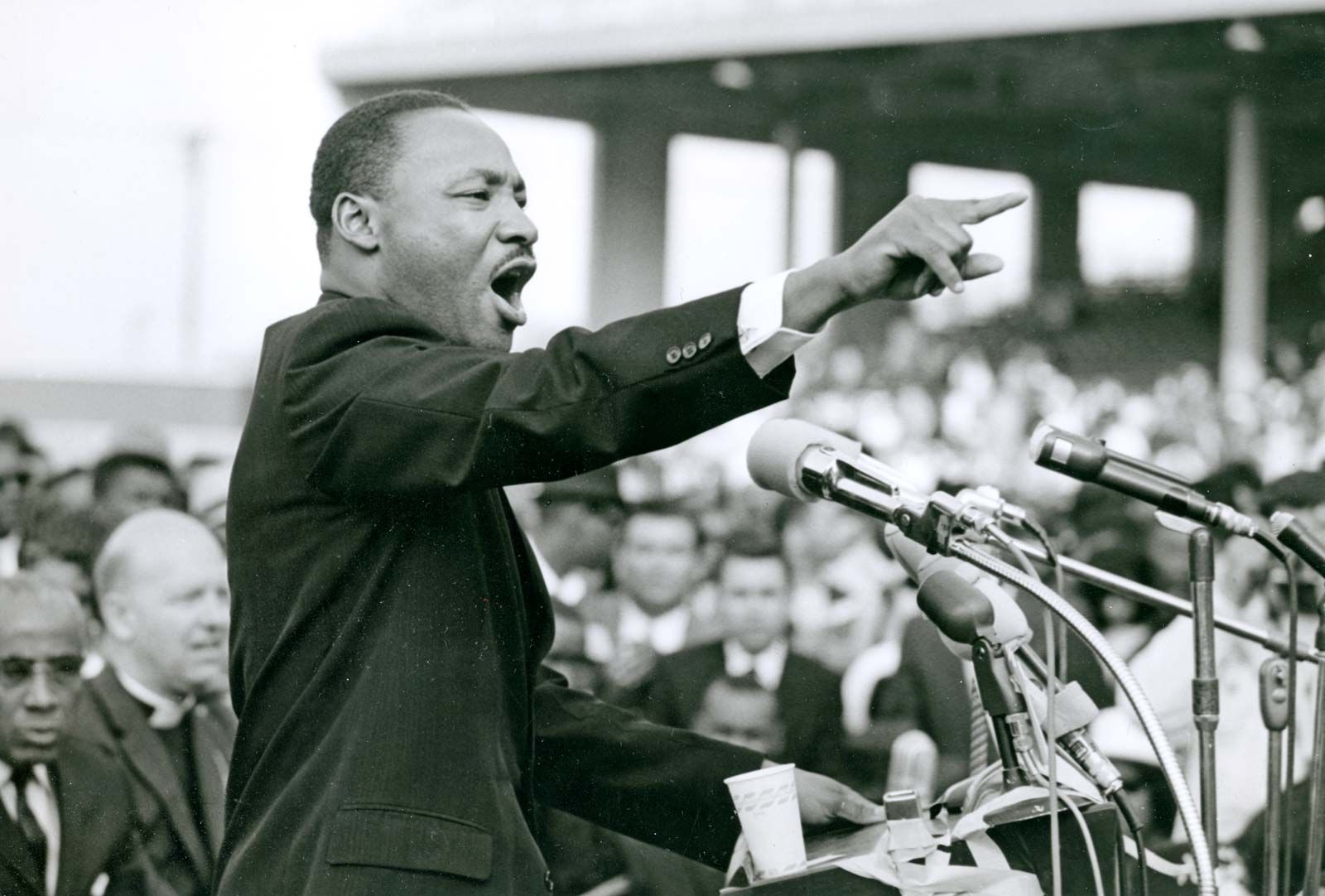 Black History Month dates back to 1926, when Carter G. Woodson, an African-American historian and Harvard graduate, proposed that time be set aside to honour the accomplishments of African-Americans and to heighten awareness of Black history in the United States. Not too long afterwards, Negro History Week was created that same year, with Canada celebrating Black history shortly afterwards.

For 50 years, Negro History was celebrated for just one week, until 1976 when it turned into Black History Month.

The Canadian House of Commons officially recognized February as Black History Month in December 1995, after a motion was introduced by the first Black Canadian woman elected to Parliament, the Honourable Jean Augustine.

The March on Washington was a peaceful demonstration for racial equality.

A TIME TO REFLECT AND ACT…

Today, the Burnaby Central community took the time to listen to Dr. Martin Luther King Jr.’s “I Had a Dream” speech and reflect on the following question:

“What positive change can you create in your world?”

Below are some images of what our community shared. 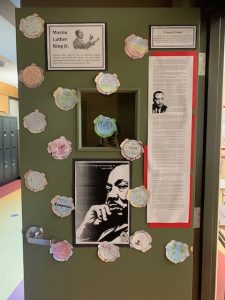 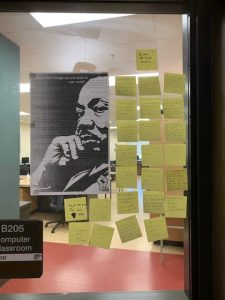 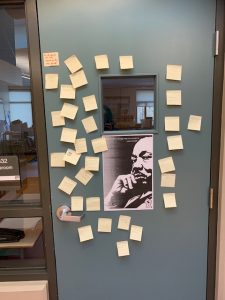 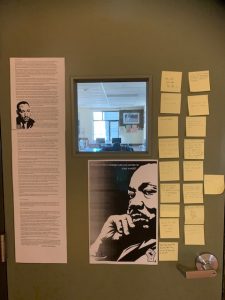 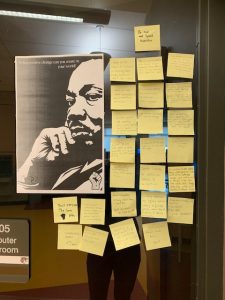 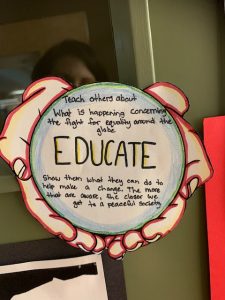 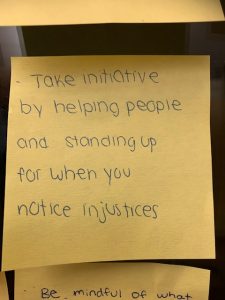 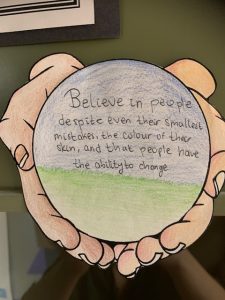 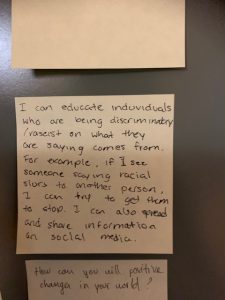 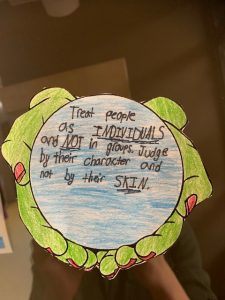 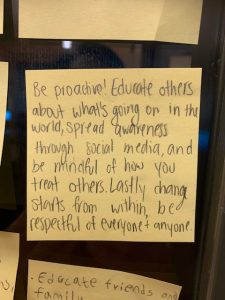 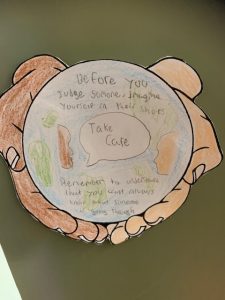 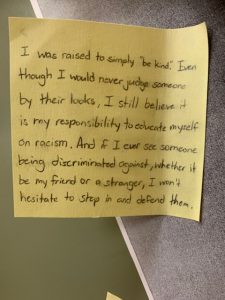 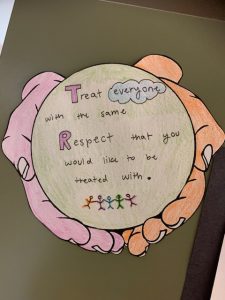 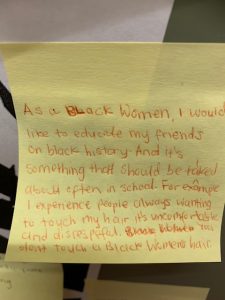 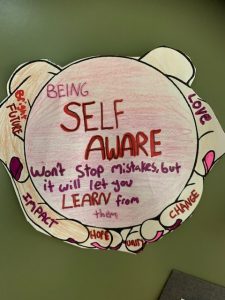 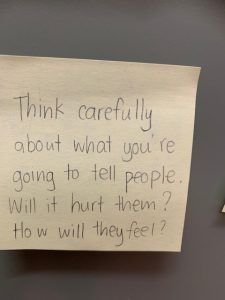 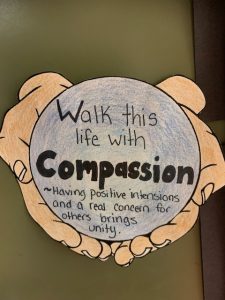 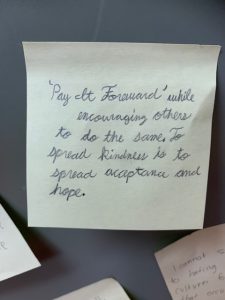 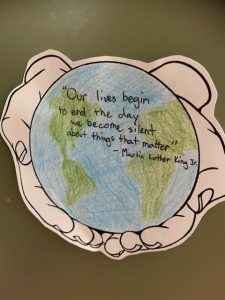 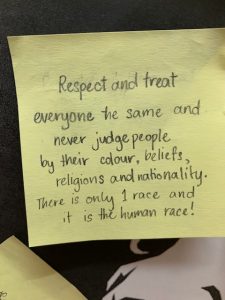 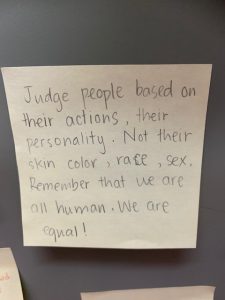 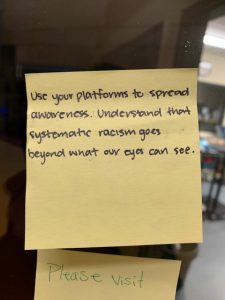 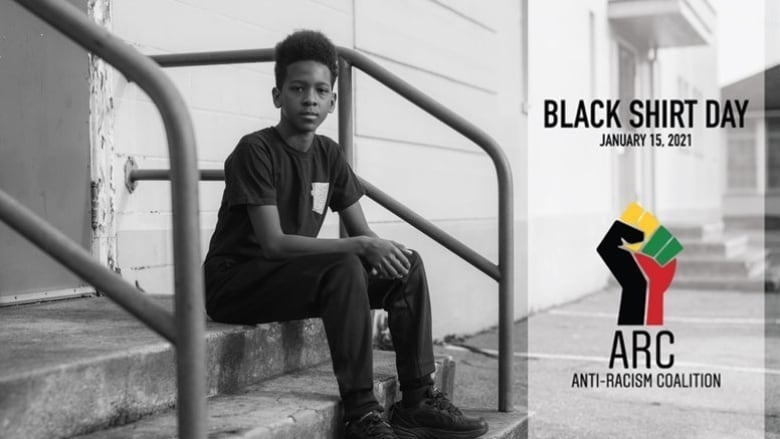 The Burnaby Central Secondary School community stands alongside our school District’s commitment to take a more active role in developing anti-racism policies and opportunities. We have taken up the call of a local group – the Anti-Racism Coalition (ARC) Vancouver – to participate in a “Black Shirt Day” and have embraced the opportunity to recognize the struggle for civil rights fought by Black and racialized Canadians.  We display our commitment to be part of the solution to the systemic racism we know exists all around us, including in our schools and in our community.  Please join us in wearing a black shirt on Friday January 15th, Martin Luther King Jr’s birthday, to show support for the anti-racism work we all need to do together.

For further information on the call for Black Shirt Day, please go to the link below.

BE THE CHANGE YOU WISH TO SEE IN THIS WORLD!