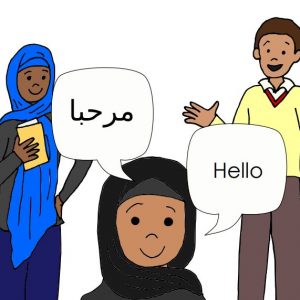 Some people may mistakenly believe that raising a child in a bilingual or multilingual household (meaning they speak more than one language) puts them at risk for language delays. Language delays can still occur in bilingual children, but bilingualism itself is not the cause.

The idea that two languages causes language delays in children has been a long-standing myth in English communities. However, research has dispelled this myth. Children are able to learn two languages at the same pace as other children who are learning only one language.

All children can learn more than one language, even if they have a developmental delay or other diagnosis

Thankfully, the facts about bilingualism and how bilingual children’s languages develop are becoming more widely known. Some professionals continue to tell parents to drop a language when their children are experiencing speech and language or developmental delays. However, we now know all children can be given the opportunity to be bilingual. This applies to families that use a language other than English in their home, or families that are choosing to pursue additional language programs in school, such as French immersion.

Bilingualism does not cause confusion or language delay, even if the child has a developmental delay or another diagnosis such as Autism Spectrum Disorder or Down Syndrome. Current research overwhelmingly shows that speaking to children with these diagnoses in two or more languages does not result in additional language or social delays.

Just like monolingual children, bilingual kids may also have speech and language–related challenges

If you are concerned, discuss your observations about your child’s linguistic abilities with a speech-language pathologist to determine whether further assessment would be beneficial.

What can bilingual parents do to help their child?

If the child continues to have difficulty in their first language or learning more language, discuss your concerns with a speech–language pathologist.

Hold On to Your Home Language: Brochures in 26 languages to encourage families to use their home language with children