This Saturday was Independent Booksellers Day and I went over to one of my favourite, Iron Dog Books.  This is a small, but busy, bookstore.  The owners started with a bus, but now have this great little shop on Hastings.  I have other favourites as well.  Over in North Van, Edgemont Village, a great little community, is bookended by 2 stores; on the north end, 32 Books, and at the south end, Kidsbooks.  This is a satellite of the original Kidsbooks in Kitsilano.  All of these bookstores are wonderful places, filled with books (of course), and, wait for it, employees who are readers!  This is the joy of independent bookstores.  When you go into one, the booksellers are also book lovers, and therefore book readers.  They are founts of information and suggestions.  Their enthusiasm for the books they order and sell is palpable.  I have bought many a book that I’ve ended up loving on the recommendation of these wonderful people.  They are my people and I love the opportunity to visit and to surround myself – and you, BMSS students – with their books.

April is Literacy Month here at Burnaby Mountain.  While we’ll be saving the school-wide celebrating for April 11 – 14, here in the Library Learning Commons, we’re going to make a full month of it.  So we’re starting with a week that encourages you to think about your Freedom to Read.
Books can take us to different times, different places, just … different.  Sometimes we see our own lives in them, sometimes others’ lives – a chance to maybe grow some empathy.
Sometimes books can make us feel uncomfortable.  There seems to be a lot of that out there right now.  Stories or information that make people uncomfortable, things they don’t want to read or don’t want others to read.  This is not new; it has been happening for as long as there have been books.  But the challenging and banning of books seems to be on the uptick.
While you can decide there are books you don’t want to read, don’t let your friends, someone else’s parents, or that random person down the street decide that for you.  Stand up for your right to choose and to read.

“Censorship comes from a place of fear. We fear that which is different, what we cannot comprehend.  Books gift us with understanding, empower us with knowledge.”  – Ellen Hopkins

Welcome to a new year – 2022.  I still remember the excitement of the new millenium, the 1900s sliding into the 2000s.  When I was young, looking ahead to that, it felt like the future.  But here we are, 22 years on, and things don’t feel all that different.  Except maybe the masks…
I hope you had a good holiday.  It was one of my best.  A lot of reading, a little knitting and sewing, a puzzle, and snow(!).  It was a quiet couple of weeks; just what I needed.  And a white Christmas.  It doesn’t get better than that.
So now we’re back, a week later than expected, and ready to push on.  During this uncertainty, take time to relax and breathe and do something that brings you joy.  If that’s more Hallmark Christmas films, so be it.  If it’s taking a walk in this wintery (not)wonderland, bundle up well with a waterproof jacket and boots.  You’re even still allowed to bake cookies in January!
Just don’t let your classes overwhelm you.  Do your best to stay on top of things, but remember that we, your teachers, are all here to support you.  Let us know what you need and how we can help.  You know where we are.

In Prose. Being a Ghost Story of Christmas.  This classic Charles Dickens story, published in 1843, is as relevant to our world as it was to the Victorians.  Ebenezer Scrooge has, over his adult life, slowly grown to love money to the exclusion of all else.  It will take a review of his earlier life and a view of the future to help him recognize what he has become and may be.
Every year, I read this story with my son.  I love the language and the tradition of it, but it’s the message of hope and love that gets me every time.  Christmas (or the holiday season if you prefer) is not about gifts (although those are fun!) but about joy, kindness, and peace.
Take some time to consider what you can be grateful for, and how you can make this time special for those around you.  And let those continue throughout the year.
Find some time to read the story (it’s quite short), or an updated version, and to watch one of the films.  The Alastair Sims version is considered the classic one, but I always enjoy the Muppets one.
Of course, these are available here in the library learning commons.

The Declaration on the Elimination of Violence Against Women was issued by the UN General Assembly in 1993.  It defines violence against women as “any act of gender-based violence that results in, or is likely to result in, physical, sexual or psychological harm or suffering to women, including threats of such acts, coercion or arbitrary deprivation of liberty, whether occurring in public or in private life.”
Nearly 1 in 3 women are abused during their lifetime.  Less than 40% of those will admit to that abuse and get help.  November 25 starts a 16 day campaign to inform but also to work towards a future in which girls and women do not have to face gender-based violence.  The campaign ends on December 10 – International Human Rights Day.
This year’s theme is Orange the World:  End Violence Against Women Now! All of us can contribute to a better and safer world; check the UN website for some ideas on how you can help to end violence against women.

The Queen of Crime.  Outsold worldwide by only The Bible and Shakespeare. Dame Agatha Christie’s first book, The Mysterious Affair at Styles, was published in 1920 and her last, Postern of Fate, in 1973.  Known best for her detective mysteries, Christie also wrote plays, one of which, The Mousetrap, ran in London from 1952, becoming the world’s longest running play, closing only in March 2020 due to the Covid-19 pandemic (but re-opening this year in May). 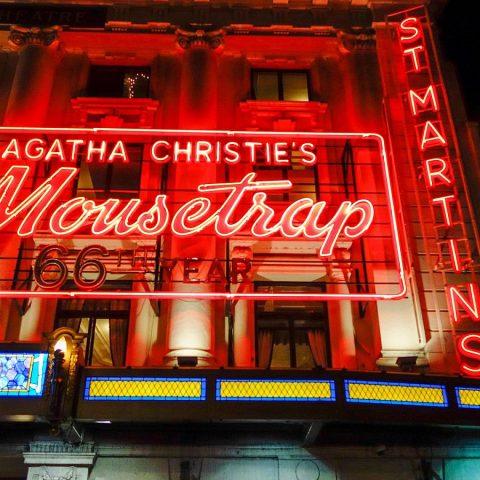 Christie’s most famous detectives are Hercule Poirot (a Belgian and former police detective) and Miss Marple (a little old lady who has lived in the same small village all her life, providing her with plenty of insight into human nature).
If you haven’t sampled Christie’s ‘cozy’ mysteries yet, a good place to start is with And Then There Were None (one of the top selling books of all time) or The Murder of Roger Ackroyd, voted the “best ever novel” ever by 600 professional novelists of the Crime Writers Association in 2013. 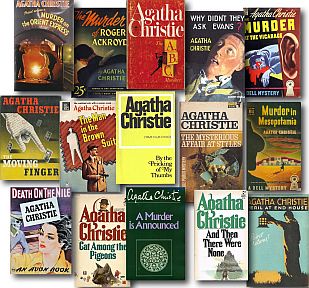 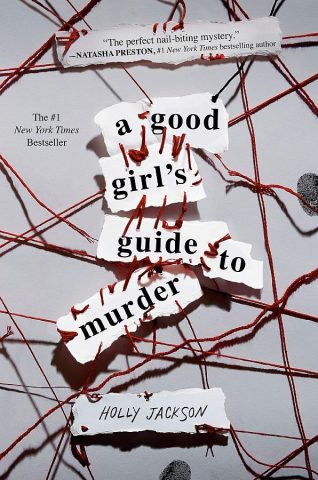 Pippa’s sister was murdered by her boyfriend, who then killed himself.  Case closed – 5 years ago.  But Pippa’s not convinced.  She knew the boyfriend, Sal, and she doesn’t believe he would have killed her sister.  Now in grade 12, Pip decides her final year project will be an investigation to prove that her sister’s murderer was someone else.  Unfortunately, there is someone in town who doesn’t want Pippa poking her nose into the past and when she begins to uncover secrets, Pip may be headed for dangerous trouble. 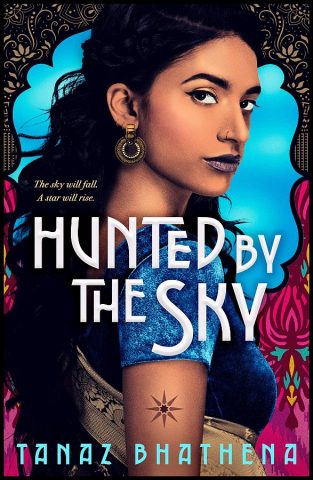 World building, magic, magical creatures, a possible saviour character, good vs. evil; these are just some of the characteristics of a good fantasy story.  In Hunted By the Sky, in a world inspired by medieval India, Gul watches her parents be murdered by the king’s warriors because she has a sun-shaped birthmark on her arm.  Because it was prophesied that a girl with such a birthmark would vanquish the king, he is determined to ‘disappear’ all girls with these birthmarks.
Gul is rescued by the Sisters of the Golden Lotus, a rebel group who try to teach her to use her magic.  But as has been her whole life, her magic, if she has any, doesn’t work.  But Gul does learn to fight and she wants nothing more than revenge on the king.  So when she is of age, with the help of a non-magic boy, Cavas, she finds her way into the palace grounds and into one of the palaces.  But she is in a dangerous place, and without magic, her life, and Cavas’s, may be in danger. 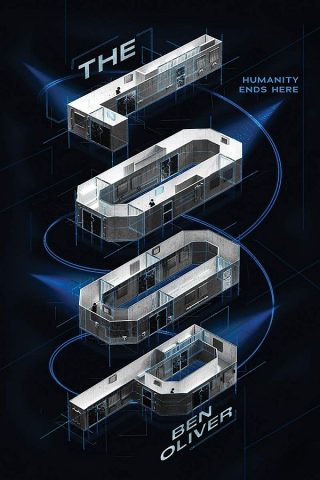 If you are a fan of The Maze Runner, The Fifth Wave, or The Darkest Minds, you will want to dive into Ben Oliver’s The Loop. It is a story of a futuristic dystopia where prisoners live in The Loop, a death row for teens under the age of 18.  Execution can be pushed back by opting into “Delays,” scientific and medical experiments for the benefit of the elite in the outside world.  Luka, wrongfully imprisoned, has been in The Loop for 2 years already with no end in sight.  But there are rumours of war outside and strange things are going on inside as well.  Luka has the opportunity to escape, but ‘freedom’ might just be worse.  If he does escape, it will be to save his family, and discover who is responsible for the chaos that has been inflicted upon the world.
Luka’s story continues with The Block, and coming next year, The Arc.

Today I’m introducing two books, both by the same author.  One is a novel that is an old favourite, the story Gary Paulsen is most known for.  The other is a very recently released memoir.

Hatchet is an adventure and survival story.  Brian is flying across the Canadian wilderness on a visit to his father.  The small plane in which he is travelling crashes and he is the only survivor.  With only a windbreaker and a hatchet, Brian must use “his know-how and determination, and more courage than he knew he possessed, to survive”. 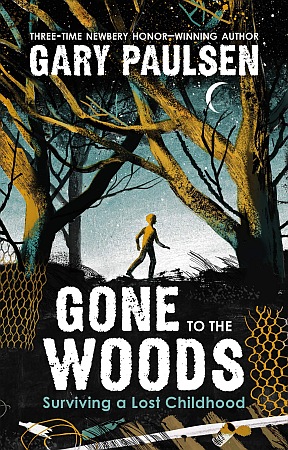 Earlier this year, Paulsen, now 80 years old, published a memoir of his youth, Gone to the Woods: Surviving a Lost Childhood.  This story is one of adventure (most often not the good kind) and a childhood that sounds more like story than truth.  And yet it is a story of what made him the man and the author he became.
Sadly, Gary Paulsen passed away a month ago.  It is fitting therefore, to celebrate the man and his work, with old and new.