Watch the video on Youtube:
“When I Get Home”

In the fall of 2018 students in our Film & Broadcast Ace-It Program, our Social Studies classes, and students in the Hair & Make Up Ace-It program all began work a student written, directed, and produced WWI Film in collaboration with the Port Moody Heritage Society. The Port Moody Station Museum recreated a WWI Trench on their property and working closely with the museum curators, we were able to facilitate a student led project. This project would take months to complete and had to be historically accurate on all accounts as per the Heritage Society’s request. This was a huge undertaking by the students and the results were amazing.

The short film titled “When I Get Home” got local and national news coverage. Local newspapers (The Burnaby NOW and Tri City NOW) both did articles on the student film project. We also reached out to CBC and they jumped at the chance to come out and spend a day with our students. On October 25th, 2018 CBC reporter Tamara Baluja spent the day on site in the Trenches with us and let our actors take over CBC’s Instagram and YouTube Channels. They filmed themselves, did interviews, and gave tours of the trench while discussing what it must have been like to ‘walk a mile in a soldier’s combat shoes’ during WWI. CBC also did their own story that aired nationally on CBC during their Remembrance Day Broadcast. CBC British Columbia won the national award from RTDNA Canada for excellence in social media for the story they did on (and with) the students and their WWI film project. The Premiere of the Film was shown on April 7th 2019 at the Port Moody Station Museum with over 110 people in attendance. Watch the youtube CBC feature here:

CBC Walking a Mile in their Shoes:  What was life like for WWI Soldiers in the Trenches? 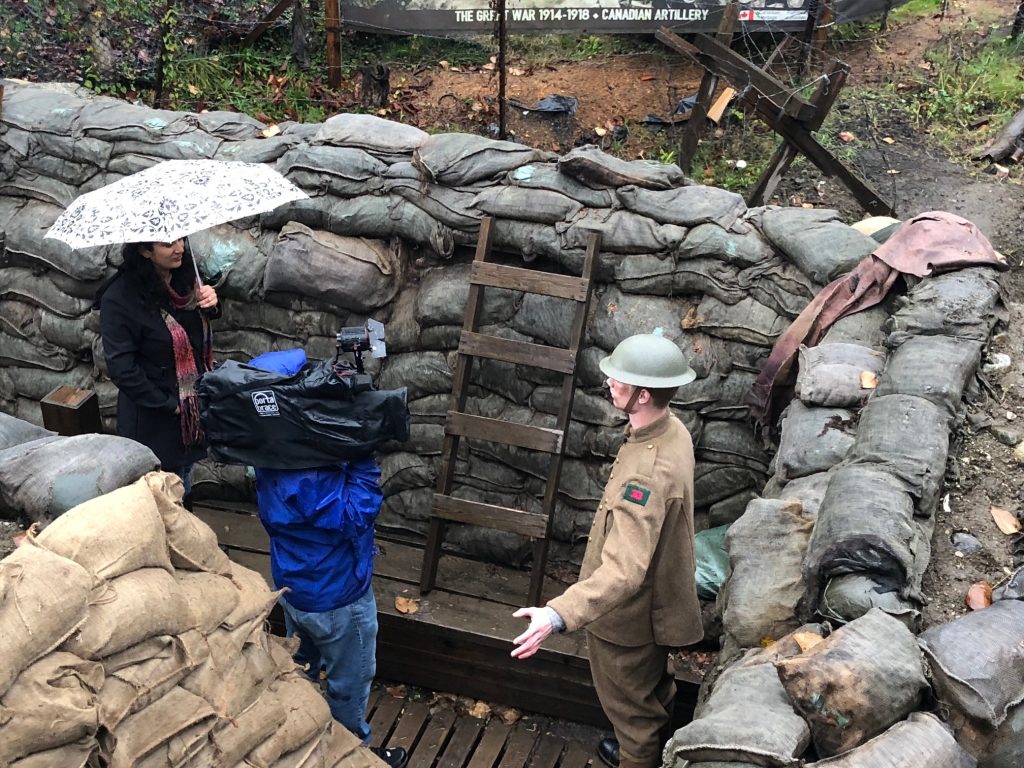 For a much more detailed two-part teacher account of the project, check out the following links from Ms. Corine Carey, the ReThink teacher who facilitated the project.

Lights! Camera! Educate! A WWI Student Film Documentary “When I Get Home”
(Part One)

A special thanks goes out to Mr. Phil Byrne (Film & Ace-It Teacher), Mr. Markus Fahrner (Curator of the Port Moody Station Museum), and Ms. Deidre Gladwin (Teacher-Librarian) for all of their help, student guidance, historical fact-checking, and patience! THANK YOU!!