Whether you’re a Star Wars fan or not, you’re probably familiar with the amazing movie music composed by John Williams. One of the tools in John Williams’ tool belt is his use of something called a Leitmotif. Similar to a theme song, (see Option 1!), a Leitmotif is a phrase or group of notes used in opera and film scores to depict a certain character or group of characters. The Leitmotif repeats at various points throughout the soundtrack and acts as a musical trigger for us by appearing in the movie when the character appears. Composers use Leitmotifs to tell us something about the characters they are depicting.
1. Watch! Click on the links below for some of the Leitmotifs, or themes, used by John Williams in his movie music for Star Wars.
2. Identify & Sing! Do you hear Princess Leia’s theme? Are you able to sing it? What about Anakin’s theme? Try to identify and sing the Leitmotifs from each of the themes that you listened to.
3. Reflect! Choose your favourite character and their Leitmotif from the videos above. (Don’t see your favourite Star Wars character? Feel free to find your own videos!) Write a list of words that you would use to describe what the sound of the Leitmotif tells us about the character you chose. Is Leia hopeful? Is Darth Vader powerful? Use as many describing words as possible to describe your favourite Star Wars character and their Leitmotif.
4. Extension! (optional) Using Chrome Music, your voice, or an instrument of your choice, create a Leitmotif that describes you!
5. Hand in! Follow the hand-in procedures as directed by your music teacher.

**I created my own Leitmotif, based on some of the words that I use to describe myself. I played my Leitmotif on my recorder. I like it because it reminds me of bird calls– one of my favourite things about being outside!** 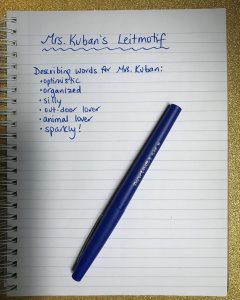